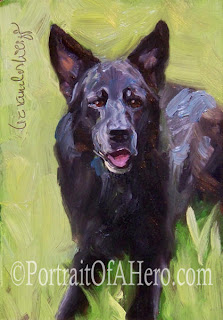 Mason-Dixon Rescue Dogs
Search & Rescue Dog (Retired)
click here to return to the Search & Rescue Index of Portraits
From her partner:
I began training Cleo when she was about 1 1/2 years old, after she had gotten pretty used to the relaxed life of being a house pet (as opposed to a working dog). I spent a very long year working with her, building her drive, convincing her to enjoy the toy so much that finding it would be enough motivation for her to search for a total stranger. I was told she would never make it as a search dog. That person that told me that was wrong! Yes, we had to work a lot harder than most others, but we did it. We became a certified wilderness area search K9 team.

One night, we were on a night search for a missing woman, who had Alzheimer's and who wandered from her home. We searched out area for two hours and on our final pass through the area, heading back to the road, I saw Cleo's light in the distance bouncing back and forth between two spots about 20 feet from each other. It was odd enough that I started to walk towards her (she was about 150' away from me, outside our sector. She kept going from one spot to the other, but as I got closer she stayed at one spot and began to bark - giving her trained indication on the missing woman. I tended to the woman and called in our coordinates to base. When I was sure the woman was okay, I walked over to the other spot where I saw Cleo. There, the woman had laid her shoes and glasses. I had never trained for a scenario where my subject partially disrobed. The woman's scent was so close, I suppose it was enough to cause a bit of confusion. Cleo in the end figured it out, and her behavior was enough to draw me in, but I began working that into mine and other's training regimens from that day forward. This was our first find, one of my proudest moments with my girl!

One of the funniest moments happened at one of our weekly night trainings. I gave my subject a general area where I wanted him to hide, and then began working the area. We ended up near an old large stone fireplace attached to a pavilion. My subject was inside one of the cubbies where wood was stored. Just outside that was a trashcan with a mop inside it, placed upside down so the mop head was sticking out. This was the old style mop head that looked like a really bad hair day :) Knowing that the dogs learn to trust their noses and not their eyes, my girl Cleo decided there was enough scent that she began barking at the mop head like it was a person about to give her the toy! I was laughing so hard I almost had a hard time directing her in closer to the subject. When she passed the cubbie she caught scent of the subject and worked into him, again giving her bark alert. That was probably 7 years ago, and we still laugh about it today!


If you are a member of Search & Rescue, K-9 or Mounted Patrol, please allow me to paint a small oil portrait for you at no charge, in gratitude for your service.
Posted by Wacky Pup at 7:02:00 PM

See What Else I Do

Get Some Fun Things